We’re not Lovin’ it: McDonald’s Rejects the #McWhopper Proposal

Burger King’s proposal to join forces with competitor McDonald’s for a one-day pop-up store between the two chains’ respective Atlanta stores was rejected by McDonald’s CEO last week. The proposed stunt was designed to promote Peace Day on September 21st by combining the restaurants’ top selling burgers to create the #McWhopper. The proposed aptly named #McWhopper, created quite the social media buzz with 39,448 Burger King mentions VS 22,816 McDonald’s mentions according to Spredfast.

As far as rejections go, McDonald’s CEO Steve Easterbrook’s dismissive response to the proposal via Facebook was pretty brutal. To the untrained eye you may have misread the response as polite. Perhaps you even thought there was a chance the discussion would be continued in private at a later date, sadly not. Will Burns broke down the response for Forbes to squash any misconceptions.

Whoa. That stings. Especially after all the effort the Burger King marketing team went to designing the proposed pop-up store, packaging and even uniforms for participating staff. Additionally, Burger King also took out full-page ads in The New York Times and Chicago Tribune and created an impressive website with the sole purpose of outlining all the ins-and-outs of the hypothetical project. But as it turns out the McDonald’s team isn’t one to be easily wooed and Burger King is now left to lick it’s albeit tasty, wounds. 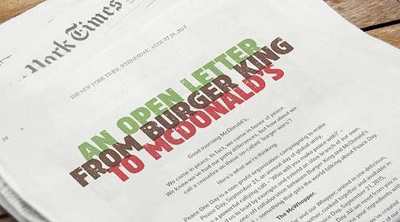 It may be Burger King that gets the last laugh though, with the #McWhopperProposal hashtag used 9,198 times, #McWhopper used 8,341 times and the slogan #SettleTheBeef used 2,882 times. If you’re going to get publicly rejected you might as well get some press out of it, amirite? The couple who were recently filmed breaking up mid-flight are still on the fence about that one. Needless to say, Burger King aren’t the only ones feeling the sting of McDonald’s swift rejection. Easterbrook’s dismissal of the #McWhopper leaves a trail of disappointed burger and fast food enthusiasts in its wake, as well as countless unrealised-finger-licking-burger-dreams.

Worldwide disappointment aside, McDonald’s decision to put their pride before peace could actually damage their brand. Results released by ABX reveal that they are falling behind in the advertising game across all mediums. This one off team up could have been an extremely fruitful opportunity for the company who have chosen to protect their ego rather than participate in this game-changing campaign. And here we were thinking Ronald McDonald was a jolly old clown when in reality the much-beloved mascot resembles a clown with a likeness closer to that of the sad clown. Sorry Ron, it’s the hangry talking (Angry + Hungry for those playing at home…).

And so as the sun sets on these could-have-been-star-crossed lovers, there is but one thing we have left to say – McDonald’s, we’re not lovin’ it ¯_(ツ)_/¯.