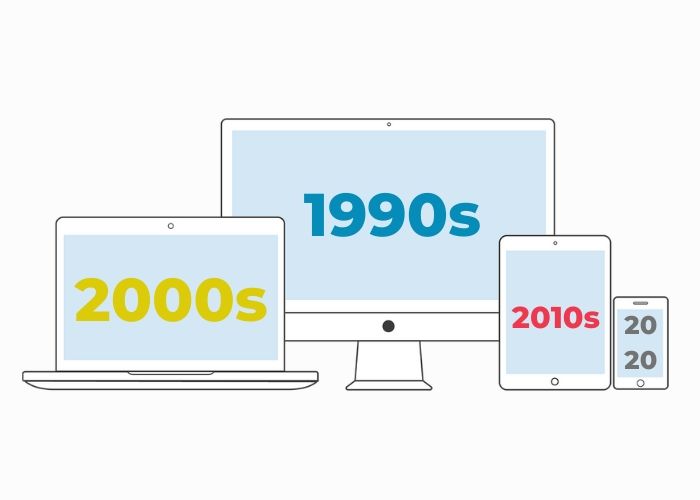 A great digital marketing strategy has become the cornerstone of success for a lot of brands and businesses. We can trace the beginnings of this revolutionary form of customer engagement all the way back to the late 80s and early 90s. The history behind how we’ve come to engage in the online realm is fascinating. In this blog, we’ll look at the evolution of digital marketing from the 1990s through to projections for this new decade.

We’ve created an infographic roadmap of all these achievements. Click here to jump straight to it at the end of the article.

In the 90s, individuals properly began their foray onto the internet, especially once the world wide web became publicly available in 1991. By 1995, there were around 16 million internet users worldwide. It was the decade for search engines and the start of the era of information online. This decade saw many businesses invest in Customer Relationship Management (CRM) tools to create and diversify their interaction with current and potential customers.

Then in 1999, came the development of electronic Customer Marketing Management (eCRM). This version combined all CRM functions with the use of the internet and online storage of information — allowing businesses to store a huge volume of customer data online which can be updated when convenient.

However, these businesses now faced a challenge — they had heaps of customer data but didn’t have the means to make sense of it. This changed with the development of salesforce.com, the very first Software as a Service (SaaS) company.

They created, what is now known as Marketing Cloud software: a platform that integrates customer data storage with analytics, brand boosting, community building and campaign tracking. This computing software served as a central point for the future of marketing technology.

The 2000s saw a switch in customer behaviours. Through the prominence of search engines like Google and Yahoo, many customers began researching products online before making a purchase. This left a lot of marketers confused as they couldn’t quite understand the buying behaviour of consumers.

This hurdle was solved by companies like Marketo, Act and Pardot when they introduced marketing automation platforms. This form of technology allowed marketing professionals to segment the market and attempt multi-channel campaigns (through email, websites etc.) as well as deliver personalised content especially for inbound marketing. It also had tools to schedule and track the performance of different mediums of marketing to get analytics for better understanding of consumers’ buying behaviour.

The 2000s also saw a boom in social media platforms, creating a new platform for marketing. It was also the decade where smart phones were popularised, giving consumers easier access to the internet, their social platforms and thus online marketing.

One of the biggest changes was society’s dependence on mobile phones. Individuals spent hours on mobile phones, whether it was for communicating with friends, taking photos, paying bills or checking emails. The rise of apps for every aspect of life meant people spent an increasing amount of time on their smartphones.

This in turn made marketers put a heavier focus on marketing online. These days you can’t scroll social media without coming across an ad or promoted post. Facebook introduced mobile ads in 2012 and seven years later it accounts for 91% of their total advertising revenue.

The increase in online advertising also allowed marketers to have better audience targeting. Businesses could now better channel their marketing revenue towards target demographics that were more likely to convert into sales.

Business also needed to ensure their websites were compatible with smartphones. Studies showed 50% of consumers will buy from businesses less often if the website isn’t mobile-friendly – even if it’s from a brand they like. In the same respect, 74% of users say they’re more likely to return to a website that is mobile-friendly.

Messenger apps also saw a major rise in usage: the top three apps being WhatsApp, Facebook Messenger and WeChat — all of which didn’t even exist in the previous decade. These mobile platforms allowed business to have one-on-one conversations with customers.

This decade also saw an influx of content marketing. From Instagram influencers and Twitter threads to Vines, Snapchats, Instagram stories and Facebook stories. As our lives picked up the pace, so did our desire for easy-to-consume content. Posts that did well with high levels of engagement were either quick, punchy and humorous, aesthetically pleasing or tugged at the heartstrings. This made marketers rethink their approach to content, focusing more on developing strategies for their online content posting.

The 2010s encapsulated our trajectory towards living more of our lives in the online sphere.

Digital marketing is now at its peak. Businesses need to make sure they have a good foot in with current practices to be able to gain the benefits of the advancements that are to come. From artificial intelligence in marketing to using social media for customer service, insight and data-driven marketing, as well as multilingual SEO — 2020 will see major innovations in the online sphere.

The vastness and pace of digital technology can seem confusing and overwhelming, especially when you’re navigating through it on your own. Our digital marketing experts are trained to be up-to-date and across all digital marketing innovations. Let us help you grow and innovate your business in preparation for the new decade ahead. Get in touch on 1300 638 734 to get started.

Ramping up your business marketing skills? You may also be interested in these suggested topics:

How to Write a Marketing Plan: Situation Analysis

How to Create the Best Email Marketing Newsletters